WARSHIPS IN THE GOLDEN AGE OF STEAM: An Illustrated Guide to Great Warships from 1860 to 1945 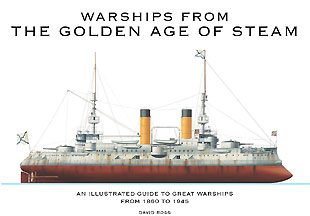 The great era of the steam warship was from the mid-1860s to the mid-1940s-an 80-year period in which a huge variety of large ships was built, ever-greater in size, firepower, and technical sophistication.

Capital ships were the most expensive and destructive weaponry prior to the atomic bomb, and their development can be traced decade by decade. Arranged in chronological order, the book provides concise coverage of the most famous warships of the period, including HMS Devastation, the first seagoing turreted ship; the Chinese Ting Yuen, sunk at the Battle of Wei-Hai-Wei in 1894; Mikasa and Retvizan, which fought each other at the Battle of the Yellow Sea in 1904; HMS Indomitable, Nassau, and HMS Lion, which all fought at the Battle of Jutland in 1916; HMS Prince of Wales, which took part in the hunt for the Bismarck, and was eventually sunk by Japanese air attack off the coast of Malaya in December 1941; and the Tirpitz, which remained a constant threat to Allied shipping in the North Atlantic until it was sunk by aerial bombers in a Norwegian fjord in late 1944.

Filled with colorful artworks, expertly-written background text, and useful specifications of 100 warships, this is a visually lavish guide to major fighting ships from 1860 to 1945. 110 color illustrations and photos.