SKULKING IN THE WOODS: Irregular Warfare in Pennsylvania During the Seven Years' War 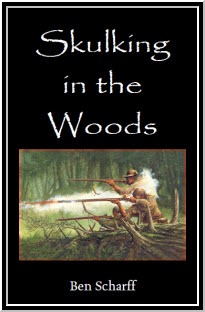 Covers five major Pennsylvania episodes of the French and Indian War -- Washington's and Braddock's defeats, the guerrilla attacks of 1756, the taking of Fort Duquesne, and the Battle of Bushy Run.

Scharff's explanations for the outcomes of these campaigns are both fresh and convincing -- Washington and Braddock could have won had they employed different strategies, and by the end of the war the British had learned from their mistakes and were able to deploy regular troops effectively against French irregular forces. Scharff dispels the myth that colonial irregulars were superior to British forces in wilderness fighting by getting beyond Braddock's overwhelming defeat to assess the war in its entirety. Included: several maps, bibliography, and an index to full names, places and subjects.