ATTACK ON THE JUNGER 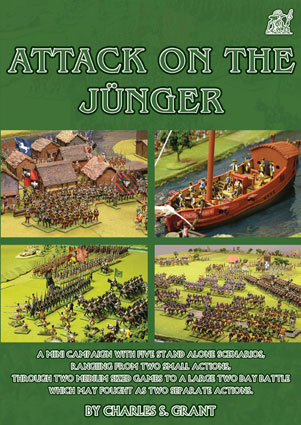 A mini-campaign with five stand-alone scenarios, ranging from two small actions, through two medium-sized games, to a large two-day battle, which may fought as two separate actions.

This is the fifth mini-campaign book dealing with the fictitious wars of the Grand Duchy of Lorraine and the Vereinigte Freie Stadte (VFS). This volume, Attack on the Junger, takes up the story straight after the previous book, The Siege of La Crenoil. That said, it is not necessary to have read the previous book. The information in this one will provide all you need.

Readers of previous volumes will know that Table Top Teasers presents wargamers with tactical problems and challenges. The series of mini-campaign books takes a number of teasers and links them together to provide what is effectively short campaigns, but without the paperwork and organization that is needed to run one. The books include some campaign aspects, for example, if you follow the course of the campaign, casualties will be carried forward from one battle to the next, and decisions will have to be made that will impact on the next battle and beyond.