BATTLE BENEATH THE TRENCHES: The Cornish Miners of the 251st Tunneling Company, RE 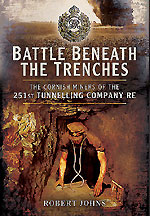 The Great War presented an environment that perfectly favored the skills of the military miner. During 1915, the Western Front was established as a static line that grew into a huge network of defense-in-depth earthworks. Siege conditions demanded siege tactics and as the ground was suitable for mining, the Western Front was a prime candidate for underground warfare.

In February 1915, eight Tunneling Companies were created and operational in Flanders from March 1915. By mid-1916, the British Army had around 25,000 trained tunnelers, mostly volunteers taken from mining communities. This is their story.