INVASION: The Conquest of Serbia, 1915 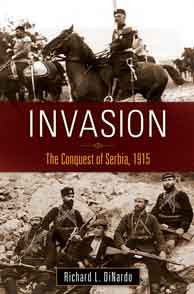 This first major study of the invasion of Serbia covers events primarily from the viewpoint of the Central Powers, which played the most pivotal role in the campaign. The book considers the impact of factors as diverse as diplomacy, command, coalition warfare, mountain warfare, military technology, and the harsh environment in which the campaign was conducted. Readers will come away with an understanding of and appreciation for the importance of the Serbian campaign as it affected the outcome of the war and the ultimate destruction of the Austro-Hungarian Empire.

Features
* Examines the campaign from the perspective of the Central Powers, rather than from the Serbian point of view
* Shows that the assault on Serbia was pivotal in that it led to the unraveling of the overall conflict for Germany
* Features research conducted at the German federal military archives in Freiburg, the Bavarian military archives in Munich, the Austrian archives in Vienna, and the Baden-Wurttemberg archives in Stuttgart
* Draws from official histories, regimental histories, memoirs, and first-person accounts
* Marks the 100th anniversary of the 1915 campaign