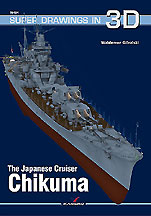 According to arrangements of the Treaty of London, light cruisers could be armed with guns of maximum caliber of 155 mm, in number of up to 15 pieces. Japanese designers, admirals Fujimoto and Fukuda developed the design of a ship classified as medium type cruiser. Its task was the protection of the main forces of the fleet against the attacks of light forces of enemy and fighting other cruisers.

The ship was ordered under the Second Program of Fleet Development of 1934. Funds for the construction of the ship were secured in the budget for fiscal year 1935/36. The ship, named Chikuma (a river in Nagano prefecture on the island of Honshu) was built at Mitsubishi shipyard in Nagasaki. The ship was laid down on 1 October 1935, launched on 19 March 1938 and commissioned on 20 May 1939. Includes 140 illustrations and graphics.