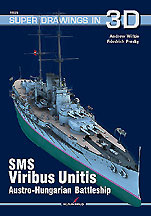 Tegetthoff Class In 1907 the navy of the dualist, multinational Austro-Hungarian Empire placed an order for a new class of warships, whose design was based on the 'all big gun' concept pioneered by HMS Dreadnought. Eventually four Tegetthoff-class vessels were laid down, including the flagship Viribus Unitis, Tagetthoff, Prinz Eugen, and Szent Istvan.

The last warship of the class was not completed until well into World War I. The vessels' careers were not especially eventful. They spent most of their service lives as a fleet in being anchored in a well-protected port of Pola with only occasional trips to the Fazana Channel (well-screened by Brijuni Islands) for gunnery practice. During the war the ships were manned mainly by reservists, while the most promising and experienced members of their crews were detached to serve onboard submarines or torpedo boats, or assigned to land-based units. The second ship of the class ended her career in rather dramatic circumstances, which is why she perhaps deserves a more detailed treatment.

Viribus Unitis was laid down at San Marco on July 23, 1910 and launched on June 24, 1911. The Emperor's court used the occasion to organize a lavish celebration designed to carry a strong political message. The Emperor insisted that the battleship be given a rather unusual, Latin name Viribus Unitis (Strength in Unity - the Emperor's personal motto).