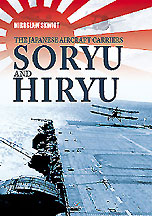 Hiryu was the second aircraft carrier included in The Second Naval Armaments Supplement Program of 1934. Originally both carriers were supposed to be sister vessels, but the number of design modifications introduced during the construction of Soryu resulted in many differences between the two. According to the original plans, Hiryu was to be completed a year after Soryu, but her construction (similarly to her predecessor) suffered delays caused by two key factors.

The first one was the implementation of the lessons learned during the reconstruction of Kaga, which was going on simultaneously with Hiryu's construction. Then there was new data available from the early service days of Soryu, which exposed some of the design's drawbacks and weaknesses. The number of issues popping up along the way was further increased by the Fourth Fleet Incident and by Japan's withdrawal from the previously signed naval treaties.

Considering all those issues, it is not hard to imagine the inevitable impact they had on Hiryu's original design and construction schedule. The greatest source of delays was undoubtedly the aftermath of the Fourth Fleet Incident, which forced the Navy Aviation Bureau to introduce changes in the design of the second carrier. After the new requirements had been implemented, Hiryu's final design (known as the Basic Project G-10) finally emerged.