The First Blitz - Bombing London in the First World War 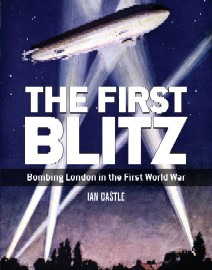 This book tells the story of Germany's strategic air offensive against Britain, and how it came to be neutralized. The first Zeppelin attack on London came in May 1915 - and with it came the birth of a new arena of warfare, the 'home front'. German airships attempted to raid London on 26 separate occasions between May 1915 and October 1917, but only reached the capital and bombed successfully on nine occasions.

From May 1917 onwards, this theatre of war entered a new phase as German Gotha bombers set out to attack London in the first bomber raid. London's defences were again overhauled to face this new threat, providing the basis for Britain's defence during World War II. This comprehensive volume tells the story of the first aerial campaign in history, as the famed Zeppelins, and then the Gotha and the massive Staaken 'Giant' bombers waged war against the civilian population of London in the first ever 'Blitz'.