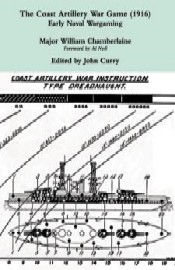 Chamberlin's Coast Artillery Wargame (1916) was designed to train the coastal defence batteries of the United States in the procedures necessary to direct fire. It was a derivative of the better known Fred Jane Naval Wargame. The foreword is written by Al Nofi.

The game was played over a large floor based model of a harbor. The players looked down on this area from cubicals at the back of the room. From there, they could practice identifying ships, locating the enemy and giving appropriate fire control orders.

The book has notes on locations of fortifications, batteries, reserve ammunition and tactical use of searchlights. It gives an example of planning of an assault on coastal batteries and how they should be used in defence. One of the key considerations is knowing when to hold one's fire to avoid giving away batteries locations prior to the main attack.

The chapters on key topics such as estimating the situation are invaluable notes for the keen naval wargamer of the big gun era.

The Coast Artillery War Game is a game, but it implies a knowledge of the Fred Jane War Game and uses the ship plans from the classic Jane's Fighting Ships series.