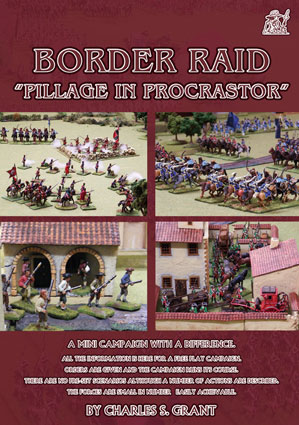 We have now arrived at the sixth mini campaign book dealing with the fictitious wars of the Grand Duchy of Lorraine and the Vereinigte Freie St?dte (VFS). For those that have followed the history of the conflict between these two adversaries this book follows on from the Attack on the Junger. However the activities are only loosely connected to the previous campaign and the book stands on its own.

I have become increasingly conscious that a large number of my campaign battles require significant wargame armies. These are not within every wargamer's reach. In the last book, Attack on the Junger, I quite deliberately included two small actions and in the last Wargaming in History I focused on Seven Years War small actions. Following on in this vein Border Raid is very much about a mini campaign with small forces and small actions.

This campaign is completely different from those described in previous books. The previous books have led the readers and players through number of set piece scenarios. The actions that took place in this campaign were not pre-planned but created by the orders and actions of the players involved. They have been described here and could be replayed. However, dozens of quite different actions might be the result of fighting this campaign.