HOLD AT ALL COSTS! The Epic Battle of Delville Wood 1916 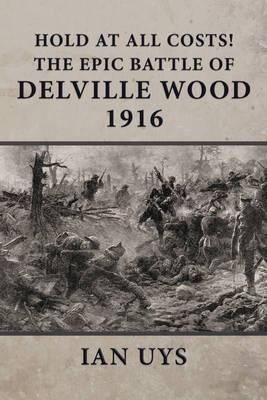 Wood in the Somme was the most famous battle ever fought by South Africans. Through this action other nations learnt to respect the fighting qualities of the men from the fledgling Union of South Africa. Erstwhile foes, Boer and Briton, fought shoulder to shoulder against the pride of the German Army. They withstood waves of attacking infantrymen; were subjected to savage artillery fire which reached a crescendo of seven shells a second, pulverizing the wood and obliterating the defenses; then fought hand to hand until overrun; threw back the enemy; and fought on with unbelievable tenacity. Includes 120 b/w maps and illustrations.

The bone-weary survivors defended the wood through five days and six nights of hell, eventually being forced into a corner of the wood. The orders were to hold on at all costs - and this they did despite appalling casualties. The saga of Delville Wood will never be forgotten by South Africa, yet the story of the battle, told through the eyes of the participants was never fully documented - accounts read like fiction, yet are wholly true.

We learn about youngsters from the plains of Southern Africa who earned the admiration of their enemy. After being shelled for eight hours they stood up from the mud to repel fresh assaults. We read of the Victoria Cross won through rescuing a wounded officer under fire; a man blown up and buried who continued on to deliver his message and earn the DCM; the officer who was captured then knocked out his guard to return to the fighting; the colonel who fought like a private with rifle and mills bombs; and many more.

The Germans' experiences are also chronicled. Extracts from their regimental histories paint a picture of their dogged determination to retake the wood. Their order was that the enemy was not to advance except over corpses! The author interviewed many of the South African survivors, now long gone, and has visited the wood on many occasions during the past 33 years. The trilogy of books he wrote on the battle has been combined into a riveting account of 'the bloodiest battle hell of 1916.'

In 1917 The Times of London recounted, 'No battlefield on all the Western Front was more bitterly contested than was Devil's Wood ... [where] South African forces won their imperishable fame - grimly hanging on against overwhelming odds and repulsing counter attacks by troops five and six times their number.