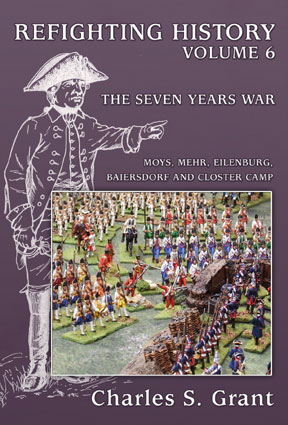 Covers the mid 18th century and the Seven Years War with five battles in a four-part format: background, detailed history with orders of battle, consideration on how to wargame the battle, and finally the wargame itself.

The five battles covered range from the relatively large battle at Moys to a small skirmish near Baiersdorf. Actions at Mehr and Eilenburg provided interesting challenges for both players. The Battle of Closter Camp presents the opportunity for considerable confusion with the early part of the action taking place in the dark.

The chapter on Command and Staff looks at the various staff structures in the major armies before looking at the wargame implications. There have been a number of significant changes in The Wargame Rules since they were published in 2012 and these changes are summarized in a short chapter. Finally, this includes an index to all previous battles covered in the series.