BREAKING POINT OF THE FRENCH ARMY: The Nivelle Offensive of 1917 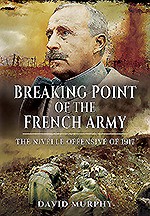 In December 1916 General Robert Nivelle was appointed Commander-in-Chief of the French armies fighting the Germans on the Western Front. He had enjoyed a meteoric rise to high command and public acclaim since the beginning of the war - he was a national hero. In return, he proclaimed he 'had the formula' that would ensure victory and end the conflict in 1917. But his offensive was a bloody and humiliating failure for France, one that could have opened the way for French defeat.

Describes how Nivelle, a highly intelligent and articulate officer, used his charm to win the support of French and British politicians, but also how he was vain and boastful and displayed no sense of operational security. By the opening of the campaign, his plan was an open secret and he had lost the ability to critically assess the operation as it developed. The result was disaster.