THE GERMAN ARMY IN THE SPRING OFFENSIVES 1917 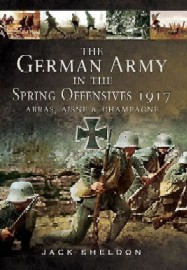 After the great battles of 1916, the Allied Armies planned to launch massive attacks North and South of the Somme. The German withdrawal to the Hindenburg Line in March 1917 forced new French CinC General Nivelle to rethink the plan. The French embarked on a major attack in the Aisne area and along the Chemin des Dames, with the British conducting large scale diversionary operations around Arras. The French suffered disastrously and, rendered incapable of further offensive operations, it fell to the British to step up the pressure, which they did at a terrible price.

This describes the event of Spring 1917 from the defenders' perspective. In particular it reveals the methods the Germans used to smash the French attacks and Oberst Fritz von Lossberg's transformation of the defenses in the Arras front. Actions described in detail are the bitter battles around Monchy Le Preun, the Roeux Chemical works, and Bullecourt as well as the capture of Vimy Ridge.