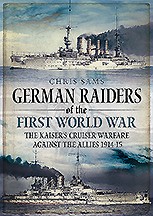 As the world plunged into war in August 1914, two Kaiserliche Marine fleets and several detached cruisers lay beyond the North Sea. These vessels posed a serious threat to British merchant vessels and naval superiority.

Beyond the British blockade there was little chance of reinforcement and resupply of ammunition - their commanders had to make some hard decisions as to what to do for their crews. Admiral Wilhelm Souchon had to cross the Mediterranean with a superior French and British fleet in pursuit. Admiral Maximilian Von Spee had to decide what to do half a world away from Germany with colonies and friendly shipping rapidly being overtaken by Allied forces.

With only the ammunition on board his vessels, he had to fight his way through the British lines to get his men home. Captain Karl Von Muller led the 'Emden' on a daring campaign of commerce raiding as did the commander of the 'Karlsruhe'. Other cruisers also carried out cruiser warfare seriously affecting Allied merchant shipping. The Royal Navy expended a lot of resources to try and remove these threats and Admiral Craddock swept down the coast of America chasing phantoms only to find what he was looking for with fatal results at Coronel.