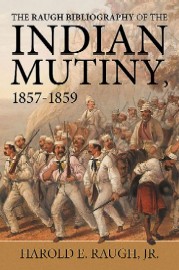 This is a comprehensive and authoritative research guide and bibliographic platform that identifies and frequently annotates thousands of contemporary, current, and hard-to-find English- and foreign-language books, journal articles, government documents, academic studies, and unpublished personal papers and diaries on all aspects of the Indian Mutiny. Arranged chronologically and topically, chapters cover general Indian history, British imperialism, the East India Company, and its army; the causes of the Indian Mutiny and key Indian leaders (Nana Sahib, Rani of Jhansi, Tantia Topi, and others); and military operations and activities of the Mutiny, with individual chapters focusing on Delhi, Cawnpore, and Lucknow.

Other chapters are devoted to participating unit and regimental histories; the aftermath of the Indian Mutiny; London Gazette Despatches; and various supporting services of the British and Indian Armies and related subjects, including intelligence operations and engineer and medical support, the press, religion, literature, gender studies, awards, and monuments and memorials. Further chapters include autobiographies, biographies, journals, and letters of leading military commanders (Campbell, Havelock, Outram, Rose, and Napier) and other Mutiny participants and observers. Document repositories and military archives around the world have been scoured to identify and list hundreds of unpublished participant letters, diaries, and manuscripts; official government documents; and published soldiers' letters. Of significance, this bibliography also enumerates hundreds of book chapters, journal articles, and conference papers originating in India in commemoration of the 150th anniversary of the Indian Mutiny in 2007 and providing an Indian perspective on events.

The Indian Mutiny was a series of generally unconnected military revolts of native Indian soldiers, frequently accompanied by bloody atrocities and suppressed by the British with equal savagery, against the rule and authority of the East India Company. It was also perhaps the inevitable clash of British 'civilization' with Indian customs, traditions, and religion. This conflict definitely shocked the British, and it was a pivotal event in British imperial and military, as well as Indian, history. The Indian Mutiny broke out on 10 May 1857, and it did not officially end until 8 July 1859. The Mutiny itself can be divided into a number of campaigns.

The first campaign consisted of the siege and capture of Delhi (June-September 1857). The second was the campaign in Oudh, including the defense of the Lucknow Residency (July-November 1857); the September and November 1857 reliefs of Lucknow; the defense (June 1857) and the three battles of Cawnpore (July, November, and December 1857); the final capture of Lucknow in March 1858; and the pacification of Oudh and Rohilkand (Apri-June 1858). Operations in Central India were conducted in two phases, from June-November 1857 and January-June 1858. The Battle of Gwalior, 19 June 1858, was the last major engagement of the Indian Mutiny. Final mopping up operations took place from July 1858 until May 1859.