BANNERS AND STANDARDS: From the time of the Thirty Years' War Vol. 1 - The Protestant Union and the Swedish army under Gustav II Adolf 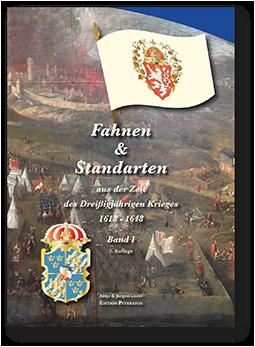 by Lucht, Antje and Jurgen

The first volume in the series Banners & Standards from the time of the Thirty Years' War is divided into three sections.

* Flags and standards of the Protestant Union be reproduced. In addition to flags of Christian of Brunswick, Frederick V of the Palatinate and Count Ernst von Mansfeld also ensigns of many cities and regions listed. Standartenfuhrer the Margrave of Brandenburg-Jagerndorf, the under Palatine Regiment of Obentraut and many others as well as trumpeter flags from this period.

* Subsequently important events of the Thirty Years War from the period 1618 to 1635.

In this book, all flags are shown, which during the occupation of Augsburg 1632-1635 drew the Benedictine monk Reginbald Mohner and of which Major Erland North Falk, an officer of the Swedish army, prepared in 1930 in Augsburg copies of the drawings for the Swedish Army Museum.