BANNERS AND STANDARDS: From the time of the Thirty Years' War Vol. 2 - The Catholic League and the Imperial Army 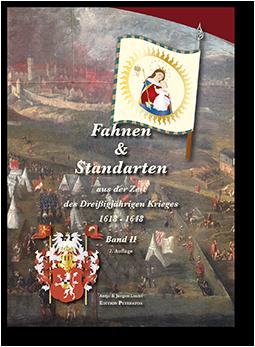 by Lucht, Antje and Jurgen

The second volume of the book series Banners & standards from the time of the Thirty Years' War is the counterpart to the first band and represents the Catholic League and the Imperial army under Ferdinand II.

Also: subsequently important events of the Thirty Years War from the period 1635 to 1648.

In this book drawings of many extant original flags are shown, which are in the Army Museum in Stockholm. In addition to the presentation of the flags, much emphasis is also placed on the size.