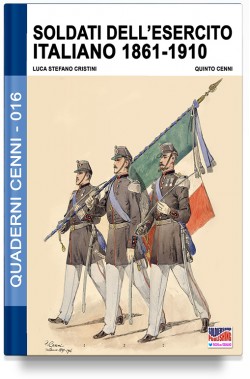 The Italian Royal army was the Army of the Kingdom of Italy from May 4, 1861 to June 1946. Born from the Sardinian army, it was employed in all the war events that saw the country involved, including the third War of independence and especially WWI and WWII, and with Italian colonialism. 100 color plates

The Sardinian army, after the expedition of the Thousand Inbodys the army of the Two Sicilies and the Garibaldi, and immediately after the proclamation of the unification of Italy assumed the name of Royal Italian Army, under the Decree Infantry, issued on 4 May 1861. To the 20 existing Sardinian infantry regiments were added 46, to 9 cavalry 10 more, and 26 battalions to 10 of Bersaglieri.

The fight against the Brigandage and the third Italian War of independence (which caused 1,886 losses) were the first operational commitments of the new army, consisting of 320,000 soldiers and 11,000 officers grouped in 18 divisions.