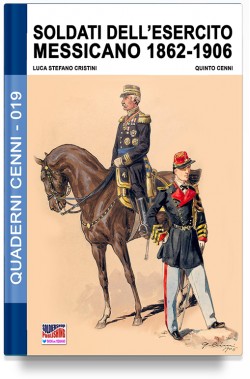 The beautiful collection of figurines made for the collection of Dr. Viskuezzen consists of 60 subjects, from 1826 through the wars caused by the French intervention in support of the second Mexican Empire of Maximilian of Habsburg, until the years of the presidency of Porfirio Diaz. In 1861, the Mexican Republican Army consisted of ten regular line battalions, or about 12,000 men.

Following the French withdrawal and the overthrow of Maximilian's imperial regime, the Mexican Republic was restored in 1867. In 1872, Porfirio Diaz, a general leader of the anti-Massimialianiste forces, became president.

In 1906, the army counted about 25,000 men. Generally well equipped, the federal army under Diaz did not however offer an effective opposition to the revolution of 1910.