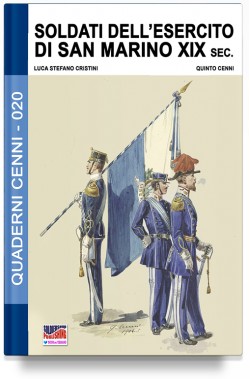 The Army of the Republic of San Marino, 80 color plates

The first lists of Marino soldiers date back to 1204 but it is of 1406 a document which, with certainty, lists a significant number of men who were entrusted with tasks of defense and public order. In 1543, the San Marino Army was reformed for the first time, but it was only starting in the middle of the 1700 that the modern organization of the armed Forces of the Republic began. In the second half of the 19th century, it had a new reorganization of the Marino military bodies, while still holding the spirit of the traditions.

As it was permissible to expect, the style of the uniforms follows much of the Italian Army, although with some variations. An appendix offers notes on the Campaign of 1859, the various independent states and the troops of Garibaldi.