POLISH SOLDIERS DURING THE NAPOLEONIC WARS 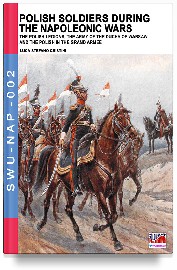 Army of the Duchy of Warsaw refers to the military forces of the Duchy of Warsaw. The Army was significantly based on the Polish Legions; it numbered about 30,000 and was expanded during wartime to almost 100,000. It was composed of infantry with a strong cavalry force supported by artillery. The Napoleonic customs and traditions resulted in some social tensions, but are generally credited with helpful modernization and useful reforms. 90 color plates