FOUR DAYS IN SEPTEMBER: The Battle of Teutoburg 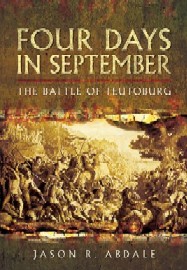 Examines the ancient sources and challenges the hypotheses of modern scholars to present a clear picture of the prelude to the battle, the fighting itself, and its aftermath.

In late September of 9 AD, three Roman legions, while marching to suppress a distant tribal rebellion, were attacked in a four-day battle with the Germanic barbarians. The Romans, under the leadership of the province's governor, Publius Quinctilius Varus, were taken completely by surprise, betrayed by a member of their own ranks: the German officer and secret rebel leader, Arminius. The defeat was a heavy blow to both Rome's military and its pride. Though the disaster was ruthlessly avenged soon afterwards, later attempts at conquering the Germans were half-hearted at best.