SOVIET AND MUJAHIDEEN: Uniforms, Clothing, and Equipment in the Soviet-Afghan War 1979-1989 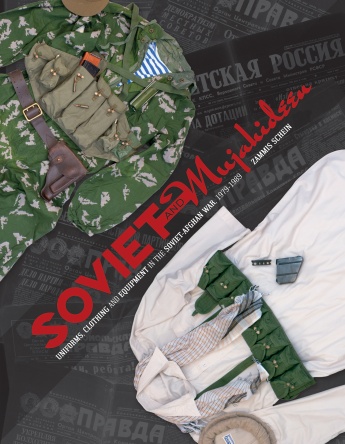 Oversized at 8.5 x11 inches, this book is the first detailed, illustrated guide to the military uniforms, civilian clothing, and equipment worn and used by Soviet soldiers and Mujahideen warriors in Afghanistan from December 1979 to February 1989. With over 500 images, this book presents front-line soldiers, NCOs, and officers in the main combat branches of the Soviet armed forces as well as Mujahideen warriors, actually ordinary Afghans, who were thrust by fate into the midst of a relentless guerrilla war against one of the largest regular armies in the world.

Uniforms presented in this book are assembled in configurations confirmed by wartime photos. All photographs taken for this book are genuine service-issue or private-purchase Soviet and Afghan Mujahideen items. 550+ color illustrations.