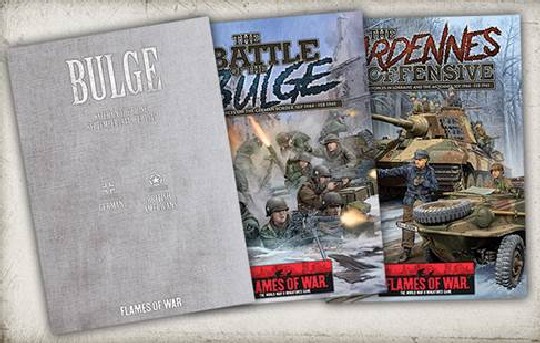 Two new FOW hard-cover books compile Blood Guts & Glory, Devil's Charge, and Nuts, along with plenty of exciting new Intelligence Briefings for German, US, and British forces in the final stages of the war.

This compilation features both The Battle of the Bulge and The Ardennes Offensive books in a special slip case released in early September 2016; the individual books were available in late September and retailed for $30.00 each.

You can field the American forces that retook the Lorraine region and pushed the Germans back to their border, or the British that drove through northern France to liberate Belgium.

The Ardennes Offensive provides Flames Of War players with the German forces needed to recreate the battles on the German frontier from September 1944 to February 1945, including Germany's new Panzer Brigades and equipment such as the new StG44 assault rifles.