CHOPPER DOWN!: The Story of A Mercenary Pilot in Africa 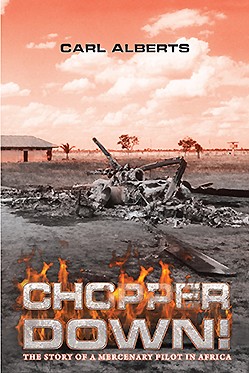 After 20 years of armed conflict in Angola and political instability in coup-ridden Sierra Leone going back to 1991, private corporate financial interests became the catalyst that spawned the creation of possibly the most successful private military corporation to date: Executive Outcomes (EO). With its initial task of securing Angolan government control in the Soyo oil-producing region, prompted by private oil interests, EO subsequently became involved in the war against UNITA throughout the country.

With little more that 100 of its own combat personnel on the ground in both the wars in Angola and Sierra Leone, the outstanding success that EO achieved was in no small part due to the force-multiplying effect and support given by its helicopter and jet pilots of the Air Wing. This is the true story of the frustrations, personal sacrifices and too often the extreme risks that the aircrews took while flying in support of the ground offensives. Most of this was achieved with outdated equipment and aircraft that were seldom airworthy.

Living under harsh conditions with the ever-present threat of enemy attack, as well as great risk from their ill-disciplined allies, the contribution these aircrews made to the overall success of the war effort was extensive. Although EO costs were but a small fraction of the replacement United Nations forces, which were generally unsuccessful, international pressure to leave prematurely, led to renewed regional conflict with great loss of life. Describes the realities of 'postwar syndrome,' his subsequent failed business venture in Liberia, and his involvement in the conflict in the Ivory Coast that brought about his arrest in South Africa for mercenary-related activities.