THE UNIFORMS OF THE IMPERIAL GERMAN ARMY OF 1914 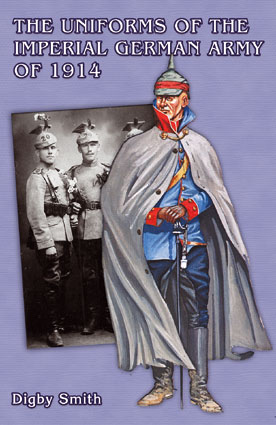 Some time ago Bob Marrion approached me to see if we might work together on this project, using his vast collection of contemporary photographs of German soldiers and equipment and his talents as an accomplished artist as a basis, coupled with my German linguistic knowledge and fearsome, two-finger computer-input skills. Unfortunately, Bob has since passed away, but his unique contribution has become a main feature of the book.

The Imperial German army of 1914 was a huge and complex organization, nowhere more so that in the fine detail of its uniforms. By use of the famous Ruhl books and other, similar contemporary publications, it is hoped that much of the mystery surrounding this topic will have been dispelled. The emphasis has been placed on the year of 1914 and the items worn at that time.

Just as in the British army, each regiment and corps had its own identity expressed in its cap, collar and shoulder title badges. Each regiment is listed, together with details of their shoulder straps and any battle honours or other distinctions worn on the helmet plates or other badges. Many of these details are then illustrated in the colour or half-tone plates and drawings.

The main body of this book is based on the 1905 `Rang-und Stammliste der deutschen Armee` by Bredow-Wedel, backed up by the excellent on-line collection of Verlyn L. Bryant`s 'Collar/Shoulder Tabs - Imperial' in the GDC Reference Library at www.GermanDaggers.com.

I am also grateful to Brigadier Charles Grant OBE who made available some of the late Doug Haggar`s colour plates of Imperial German cavalry
It is hoped that this book will open the door to many readers, into the fascinating history behind the imperial Prussian army of 1914, the proud regiments of which faded into history on 6th March 1919.