THE GERMAN ARMY: From Mobilisation to First Ypres - Images of War Special Issue 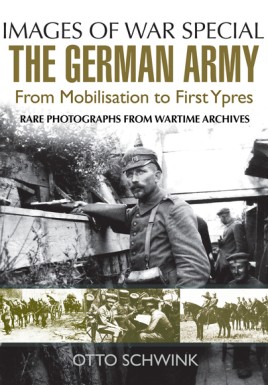 This new volume in the long-running Images of War series features the actions of the Imperial German Army at Ypres from 1914-15. Includes 250 illustrations.

In the autumn of 1917 Captain Otto Schwink, a General Staff Officer, by order of the Chief of the General Staff of the Field Army, produced a book entitled The Germans at Ypres 1914. Herr Schwink's text is reproduced accompanied by rare photographs illustrating the Imperial German Army as it was in the prewar era and in the field during the campaign, which culminated in the four year struggle for the Ypres salient. Photographs depict the troops, officers, supporting artillery, High Command, and the events of the 1914 Christmas truce.

This volume also features a chapter on Adolf Hitler's service during the Great War, which both began and ended in the Ypres salient, and includes a selection of rare photographs illustrating Hitler's experience in the ranks of the Bavarian Army in Flanders.