ARMOURED WARFARE IN THE FIRST WORLD WAR: Images of War 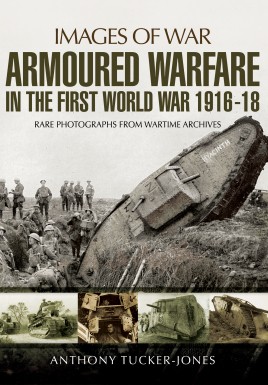 In a selection of over 150 archive photographs he offers a fascinating insight into the difficult early days of this innovative new weapon, describing its technical history and its performance in combat. While the Battle of Cambrai in 1917 is often held up as the first large-scale tank battle, tanks had already served at Flers-Courcelette on the Somme, during the Nivelle offensive and the battles of Messines and Passchendaele.

His book shows that the development of the tank was fraught with technical obstacles and battlefield setbacks. It was invented by the British and the French at almost the same time to help break the deadlock of trench warfare, and the British deployed it first in 1916. Belatedly the Germans followed the British and French example. The initial designs were continuously refined during two years of intense warfare. Finding the right balance between power and weight, getting the armament right, and working out the best tactics for tanks on the battlefield was a tricky, often deadly business.