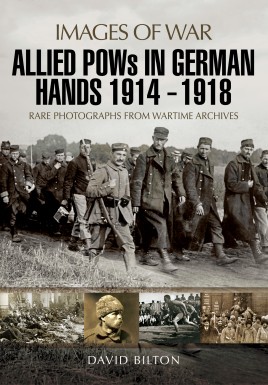 In this first fully illustrated history of the Kaiser's unwanted guests, the author looks at the lives of the thousands of Allied men who became POWs during the Great War.

After making the decision to surrender, the soldier, sailor or airman was at the mercy of his captors. The book examines what it felt like to surrender, the dangers involved and then the often long journey to a camp in Germany. For some the there was no journey, they were kept at the Front to help the German war effort.

Not all camps were the same; some were better than others, a situation that could easily change with the replacement of the commandant, but most were poor. Disease was rife and there was little medical care. Barracks were usually cold and there were few blankets and little clothing. Men were abused, starved, denied their basic rights, sent to work in appalling conditions and some were murdered. There were thousands of civilians interned as well, who mostly fared better than combatants, however they did not have it easy.

With the arrival of parcels from home most prisoners could implement their diet, but this was not the case for Russians who received little help and relied on handouts from other prisoners.

Escape was a priority for many men; thousands tried, even though they could be shot for the attempt, as some were, but most failed to make it home.

Then the Armistice was signed and the POWs were freed. Some managed to walk to Allied lines, most had to wait for transport. Within a few months they were all home, except for the thousands of prisoners that were missing, that the Germans claimed they never had.