TO RULE THE WINDS: The Evolution of the British Fighter Force Through Two World Wars -- Volume 1: Prelude to Air War: The Years to 1914 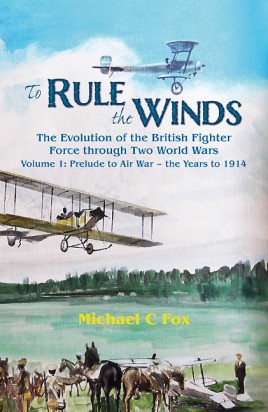 Story of creation of the Royal Air Force's fighter squadrons. The illustrated, referenced, and with a comprehensive bibliography and a detailed index.

This first volume recounts the origins of military aviation in Britain, up to the beginning of World War I in the August of 1914. By the 18th and 19th Centuries, balloons had been tried in various conflicts on the Continent of Europe, during Britain's involvement in the Napoleonic wars, the Crimea, South Africa and elsewhere, as well as during the American Civil War.

After the Wright brothers flight in December 1903, Britain only started its aviation efforts in 1908. It was Bleriot's crossing of the English Channel in 1909 that proved beyond doubt that Britain could be invaded by air. Thereafter, Britain developed a small force of miscellaneous and unarmed airplanes to take the field with the British Army in 1914.

This first volume explores the origins of that force: the Royal Aircraft Factory; the Air Battalion of the Royal Engineers; the Royal Flying Corps; disaffection with airships; early development of airplanes for war; problems with monoplanes; aerial gunnery and wireless experiments; the foundations of an Air Ministry; preparations for aerial defense.