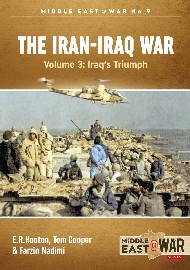 The third volume covers the last two years of the war on the Southern front, where Iranians made their last supreme effort to break through Iraqi lines during the winter of 1986-1987. Iraqi defenses just about held. For a year, there was an ominous silence, but then Iraq launched a series of devastating blows that recovered the Faw Peninsula, pulverized weakly-occupied Iranian positions, and drove the frontlines back to the international border. Iran was left with no option but to sue for peace.