ARMIES OF OCTOBER: Armies and Weapons of the 1973 Arab-Israeli War 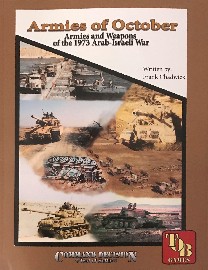 In October of 1973 the Arab armies of Egypt, Syria, and almost a dozen other states launched a surprise attack against the Israeli-occupied territories in the Sinai and Golan Heights.

This offers a comprehensive study of the belligerent armies available under a single cover. For the armies of Israeli, Egypt, Syria, Iraq, Jordan, Morocco, Tunisia, Algeria, Libya, Kuwait, Saudi Arabia, and the Palestinian Liberation Army.

The Armies of October features:

For Command Decision players we also include game organizations from division to battalion level and a complete list of weapons and combat vehicles with all game statistics.

The October War, the Yom Kippur War, the Ramadan War-all these names described the largest and hardest-fought war in the long history of the Arab-Israeli conflict. Never was there a conflict of this scope, featuring this much back-and-forth maneuver, or such dramatic turns of fortune. For the wargamer, this conflict provides armies more balanced in equipment and capabilities than any other Mideast war. It also saw the first widespread use of wire-guided antitank missiles and the first major generation of post-WWII armored vehicles.

The October War provides a unique conflict for study and gaming, a blend of the logical development of WWII weapon systems encountering the early examples of late-century military technology in the form of wire-guided missiles, extensive mechanization throughout the force structure, and omnipresent light antitank weapons.