IF THE KAISER COMES: Defence Against a German Invasion of Britain in the First World War 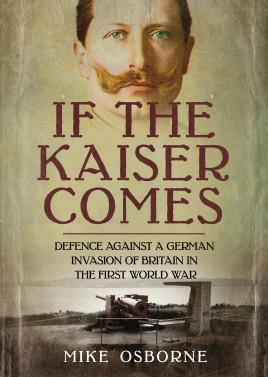 On the night of 20 November 1914, everything pointed to the likelihood of invasion by a German army, whisked across the North Sea on a fleet of fast transports. The Royal Navy's Grand Fleet prepared to sail south from remote bases in Scotland, shallow-draught monitors were moored in the Wash, and 300,000 troops stood by to repel the enemy on the beaches.

Fortunately, the night passed without incident. For thirty years prior to the First World War, writers, with a variety of motivations, had been forecasting such an invasion. Britain regarded the army as an imperial police force and, despite the experience gained in military exercises involving simulated invasions, the Royal Navy was still expected to fulfill its traditional role of intercepting and destroying enemy forces.

However, as the technology of warfare developed, with the proliferation of ever more powerful warships, submarines, mines, and torpedoes, alongside the added promise of aerial assault, it became obvious that these long-established notions of the Navy's invincibility might no longer be realistic. The perceived threat of invasion, whether justified or not, persisted throughout World War I, and this book describes the measures taken to protect Britain against enemy attack by land, sea, or air.