THE SEA DEVIL: The Adventures of Count Felix von Luckner, the Last Raider Under Sail 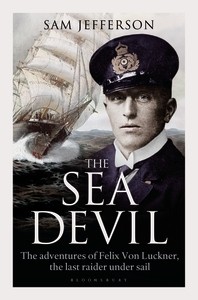 In 1916, a tall ship named Hero sailed under Norwegian colors out of the Elbe river in Germany. Loaded with cargo and ostensibly bound for Australia, she was in reality a German raider: the Seeadler, commanded by German aristocrat Count Felix von Luckner. She was tasked with destroying as many British merchant vessels as possible.

Telling the story from the viewpoint of the utterly foxed and infuriated British Admiralty trying to capture this mysterious raider, The Sea Devil follows von Luckner's extraordinary activities. He destroyed fourteen ships, but in the most 'gentlemanly' fashion. Only one man died in the process: his modus operandi was swashbuckling adventure interspersed with champagne. As the Admiralty's fastest cruisers closed in on him, Von Luckner sped towards Cape Horn, the most dangerous stretch of water on the planet.