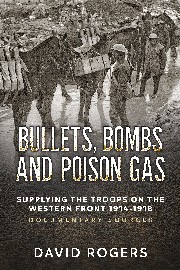 Soldiers in the trenches were issued with four bullets a day unless they were either snipers or manned a machine gun. This does not seem like a lot of bullets. However, four bullets a day is 28 per week. Therefore a million soldiers need 28 million bullets per week. Of course there were a lot more than a million troops at the Western Front, and despite soldiers with other than front-line duties, the number of bullets required was considerable!

Supplying the troops was further complicated by the need to ensure that the many and varied shells were available for the howitzers, mortars, and other artillery. Furthermore, there was a need for essential supplies of a whole manner of other materials, including rations for the troops and food for the horses. Aircraft and tanks also started to make an appearance on the battlefield at this time, requiring even more supplies. Indeed there is one account of a horse drawn cart carrying aircraft fuel to the aeroplanes.

The static nature of battle led to the use of a narrow gauge railway network and a roll on-roll off ferry port in Kent to speed deliveries along. Unfortunately, not all of the traffic was towards the trenches. Sadly there were many casualties who needed to return to the hospitals either in the field or back in Britain. The returning trains performed this vital function. Servicing this supply chain was a complex business, leading to some interesting issues.