UNIFORMS OF THE RUSSIAN ARMY DURING THE YEARS 1825-1855: Volume 8 - Guard Dragoons, Lancers, Hussars and Others 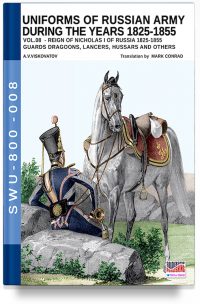 Compiled at Saint Petersburg during the years from 1837 and 1851, the Historical Description of the Clothing and Arms of the Russian Army has had an enormous impact and great importance for the study on the history of Russian costume and uniformology development.

This volume is related to the Russian Army during the Czar Nicolas Ist era, and are about the Guards dragoons, lancers, hussars and others in use from 1825 to 1855.

The topics discussed start from the early czars until the late 19th century. Our new edition has enriched the book with the plates: we revised and colored many of the images so far available just in black and white, as well we found some rare color plates with the collaboration of private collectors.