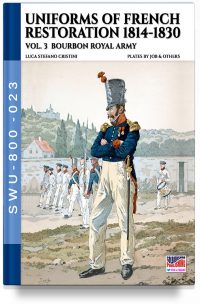 Like the other volumes in the series, this book is based almost entirely on the Viskuezzen collection, which belongs to the NYPL, to whom we are particularly grateful. We left all the captions of the plates in the original French text. All the plates have been extensively restored and partially reconstructed, since the originals preserved at the NYPL are not in good condition, often assembled in rough cut-outs etc.

Napoleon was defeated by a combined Allied army in 1815 at Waterloo, and Louis XVIII was returned to the throne. Realizing that the remains of the existing army had no loyalty to the restored monarchy, the government of Louis XVIII undertook a wholesale disbandment of what had been Napoleon's regiments. In their place he created a system of Departmental Legions with no historic connections to empire, republic, or even the pre-1792 monarchy. His government appointed many aristocratic officers to the new army, which lost much of its morale, much as it had in 1789. In 1823, a French expeditionary force aided Spanish troops loyal to the Bourbon king of that country when his regime was threatened by an uprising. In 1830, Louis XVIII's brother, Charles X, now king, was toppled in the July Revolution.