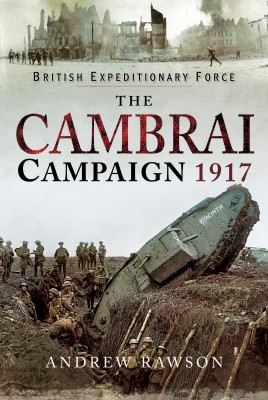 An account of the British Expeditionary Force's battles in November and December of 1917. It starts with the plan to carry out a tank raid on the Hindenburg Line at Cambrai. The raid grew into a full scale attack and Third Army would rely on a different style of attack. The preliminary bombardment would be done away with and the troops would assemble in secret. Includes 16 black and white images and 35 maps.

Predicted fire had reached such a level of accuracy that 1,000 guns could hit targets without registration. Meanwhile, over 375 tanks would lead the infantry through the Hindenburg Line, ripping holes in the wire and suppressing the enemy. The study of the German counterattack ten days later, illustrates the different tactics they used and the British experience on the defensive.

Each stage of the battle is given equal treatment, with detailed insights into the most talked about side of the campaign, the British side. It explains how far the Tank Corps had come in changing the face of trench warfare. Over 40 new maps chart the day by day progress of each corps on each day. Together the narrative and the maps provide an insight into the British Army's experience during this important campaign. The men who made a difference are mentioned; those who led the advances, those who stopped the counterattacks and those who were awarded the Victoria Cross.