ALLENBY'S GUNNERS: Artillery in the Sinai and Palestine Campaigns 1916-1918 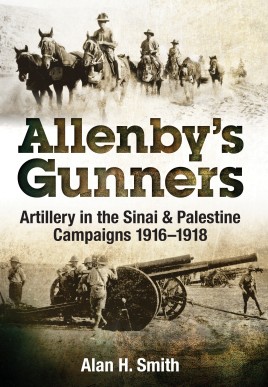 Tells the story of artillery in the highly successful World War I Sinai and Palestine campaigns. Following Gallipoli and the reconstitution of the AIF, a shortage of Australian gunners saw British Territorial artillery allotted to the Australian Light Horse and New Zealand Mounted Rifle brigades. It was a relationship that would prove highly successful and Allenby's Gunners provides a detailed and colorful description of the artillery war, cavalry and infantry operations from the first battles of Romani and Rafa, through the tough actions of Gaza, the Palestine desert, Jordan Valley and Amman to the capture of Jerusalem. The story concludes with the superb victory of Megiddo and the taking of Damascus until the theater armistice of 1918.

Smith Covers the trials and triumphs of the gunners as they honed their art in one of the most difficult battlefield environments of the war. The desert proved hostile and unrelenting, testing the gunners, their weapons and their animals in the harsh conditions. The gunners' adversary, the wily and skillful Ottoman artillerymen, endured the same horrendous conditions and proved a tough and courageous foe.

The light horsemen and gunners also owed much to the intrepid airmen of the AFC and RFC whose tactical and offensive bombing and counter-battery work from mid-1917 would prove instrumental in securing victory. This is an aspect of the campaign that is seamlessly woven throughout as the action unfolds.

The Sinai and Palestine campaigns generally followed a pattern of heavy losses and setbacks for an initial period before allied forces eventually prevailed. This is a highly descriptive volume that tells and oft-neglected story and fills the gap in the record of a campaign in which Australians played a significant role. It is a welcome addition to the story of the Australians in the Middle Eastern campaigns of World War I.