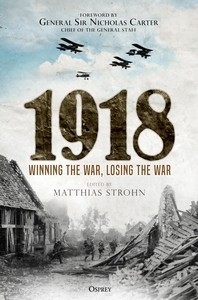 In 2018, the world will be commemorating the centenary of the end of the First World War. In many ways, 1918 was the most dramatic year of the conflict. After the defeat of Russia in 1917, the Germans were able to concentrate their forces on the Western Front for the first time in the war, and the German offensives launched from March 1918 onward brought the Western Allies close to defeat. Having stopped the German offensives, the Entente started its counterattacks on all fronts with the assistance of fresh US troops, driving the Germans back, and, by November 1918, the Central Powers had been defeated.

This new study is a multi-author work containing ten chapters by historians of WWI from around the world. It provides an overview and analysis of the different levels of war for each of the main armies involved within the changing context of the reality of warfare in 1918. It also looks in detail at the war at sea and in the air, and considers the aftermath and legacy of the war.