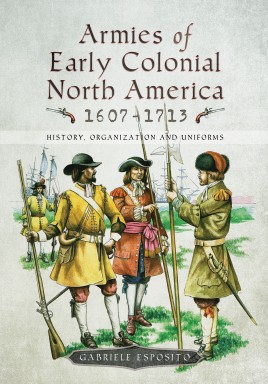 Detailed overview of the military history of Colonial North America from the first colonial settlement in Jamestown to the end of the first continental war fought in the Americas. Covers the development of organization and uniforms for the British Colonies of North America and for the French ones of Canada. Includes every colonial unit formed by the Europeans in the New World, as well as the regular troops sent to America by Britain and France -- from the early militias of the 13 Colonies to the expeditionary forces formed during the War of the Spanish Succession.

Great military events like King Philip's War and Bacon's Rebellion are analyzed and the evolution of tactics employed in this theater are discussed, showing how much warfare was influenced by the terrain and conditions in North America. Dozens of illustrations, including color art works, show the first military uniforms ever worn in North America plus details of weaponry and equipment.