THE BATTLE THAT WON THE WAR - BELLENGLISE: Breaching the Hindenburg Line 1918 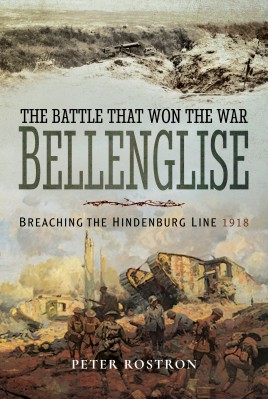 It is no exaggeration to claim that 46th North Midland Division's action on 29 September 1918 was the hammer blow that shattered the will of the German High Command.

Painting the strategic picture from early 1918 and the dark weeks following the German's March offensive, the Author lays the ground for the Allied counter-strike. Ahead of them was the mighty Hindenburg Line, the Kaiser's formidable defensive obstacle given added strength by the St Quentin Canal.

Undaunted the Allies attacked using American, Australian, and British formations. Led by Major General Boyd, 46 Division stormed the Canal and, thanks to a combination of sound planning and determined courageous fighting, seized their Hindenburg Line objective by the end of the day.

The psychological damage to the German will, already weakened by the failure of the Spring offensive, is demonstrate by Ludendorff's collapse and opening of negotiations that led five weeks later to the Armistice.