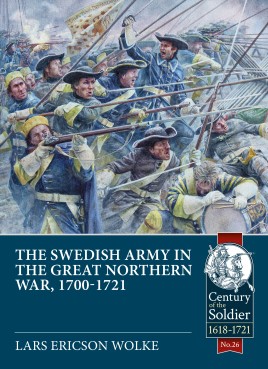 The book describes the development of the Swedish Army during the Great Northern War, 1700-1721, when Sweden fought against a coalition of Russia, Denmark-Norway and Poland-Saxony. For parts of the War Prussia and Hanover also joined the enemy coalition. The book describes how the Army was reorganized in the year before the outbreak of the war, with its unique allotment system of recruitment. The book also includes a list of all Army units during the 21 years of war.

A description of the Army as it was at the time of the outbreak of the war in 1700, as well as the system of fortresses around the Baltic Sea is provided. The equipment and tactics of the Army are presented, not the least how they developed during the long period of the war.

The development of the 21 years of war are described and discussed to give the reader a good overview of the military (and partly the political) developments. The battlefield performance of the Swedish Army is studied through descriptions and analysis of six battles and one campaign.

The book includes a list of suggestions for further reading, and is supported by a large number of illustrations including specially commissioned color uniform and flag plates.