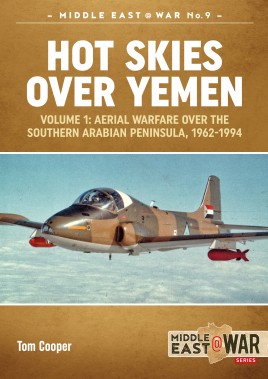 Since September 1962, hardly a week passed without a major armed confrontation or an outright war in Yemen. The number of long-lasting insurgencies, mutinies, rebellions, or terrorism-related activities that took place during this period is going into dozens. Despite duration of all these conflicts and although they may have caused as many as half a million of deaths, the rest of the World heard very little about them. At best, Yemen is nowadays known as a hotbed of international terrorism, an area that is on the receiving end of frequent US air strikes flown by UAVs, or as 'some place' fiercely bombarded by a coalition led by Saudi Arabia. Includes 120 photos, 15 color profiles, and 3 maps.

While at least some details about British aerial operations in what was Southern Arabia of the 1960s were published over the years, next to nothing is known about activities of other, 'local' air forces - like those of Egypt - and even less so about that of Yemen. This is even more surprising considering that for nearly two decades there were no less than two, fully developed services of that kind - one operated by what was then North Yemen, another by what used to be South Yemen - and that these were deeply involved in the Cold War, too.

Using newly released secret intelligence sources, neglected memoirs, and popular memory, this book is telling the story of military flying in Yemen between 1962 and 1994. It is providing in-depth insights and analysis of campaigns fought by the Egyptian air force of the 1960s, the creation of two Yemeni air forces in the 1970s, an entire series of inter-Yemeni wars of the 1980s and 1990s.