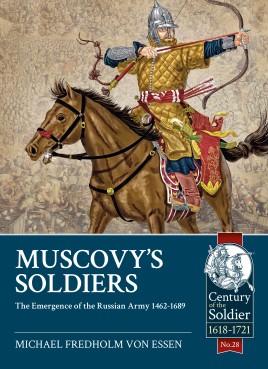 The book describes and analyses the emergence of the early modern Russian army, before the military reforms introduced by Tsar Peter the Great brought it in line with developments in Western Europe. It will be shown that Tsar Peter's reforms, although decisive, rested on a legacy of previous reforms. Yet, the origin of the early modern Russian army can be found in the East, not the West. The close association during the Middle Ages with the Mongol Golden Horde had transformed the Muscovite military system into a Eurasian one. Includes 60 black and white illustrations/photos, 8 pages of color plates, 3 maps, and 4 tables.

Besides, the detailed information on the Russian army in 1673/1674 which can be found in the military handbook then produced by a Swedish intelligence officer has never been fully used in English-language works. This information shows that by the second half of the seventeenth century, Russia already had an army that although not up to date according to Western standards, still was able to hold its own against both Western and Eastern adversaries. The book ends with 1689, when Tsar Peter's reign began and Russia's border in the east with China was negotiated.