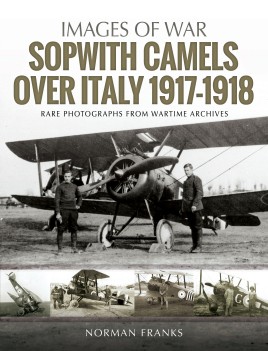 During the First World War, Italy was on the side of their British Allies and their fight was against the Austro-Hungarian Empire, bordering on Austria. In October 1917, the Austro-Hungarians managed to push the Italians back during the battle of Caporetto. With the danger signs obvious, both Britain and France sent reinforcements. Includes 130 black and white photos and illustrations.

Britain's Royal Flying Corps sent three squadrons of Sopwith Camel fighters, plus one RE8 reconnaissance squadron, and these Camel squadrons fought gallantly over the plains and mountainous regions of northeast Italy, sharing the air battle with aircraft of the Italian Air Force.

Despite the difference in landscape between France and Italy, the Camel pilots employed the same air-fighting tactics and assisted in ground support missions that proved just as destructive in Italy as they had in France.