RUN TO THE SOUND OF THE GUNS: The True Story of an American Ranger at War in Afghanistan and Iraq 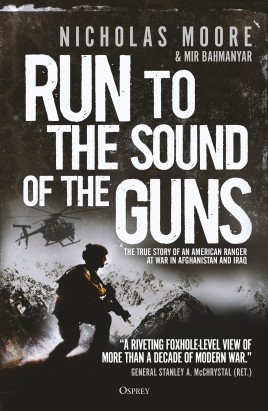 From frozen mountaintops to dusty city streets and everything in between, Run to the Sound of the Guns is a compelling and deeply personal account of a husband and father who nearly lost his life 'leading the way' in America's secretive global wars.

Nicholas Moore served as part of an elite special operations unit at the fighting edge of the Global War on Terrorism. He served for over a decade with the US Army's 75th Ranger Regiment on the battlefields of Afghanistan and Iraq.

In Iraq, Nicholas participated in the rescue of Private Jessica Lynch, hunted Iraq's Most Wanted and experienced brutal street combat, including 160 night-time missions over one 90-day deployment in the insurgent stronghold of Mosul. While serving in Afghanistan, he was also part of the search and rescue operation for Navy SEAL Marcus Luttrell (author of Lone Survivor), and was on the ground again when a Chinook helicopter was shot down resulting in the death of 38 men and one military working dog. It was the single greatest loss of special operations personnel to date.