FOR THE HONOUR OF MY HOUSE: The Contribution of the Indian Princely States to the First World War 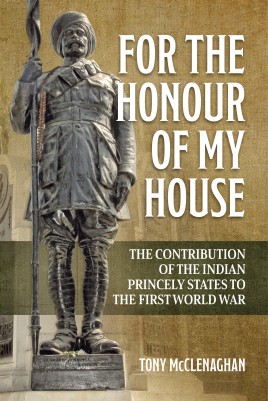 Covers the contributions of the Indian Army in WWI, especially military units provided by the semiautonomous Indian Princely States whose contribution, even in the Official Histories, barely merits a mention. Includes 31 illustrations and seven maps.

Drawing on a wide range of regimental and Army Headquarters war diaries as well as political records held exclusively at the National Archive of India, the book explores why the State rulers volunteered their services and those of their armies. It looks at the deployment of those armies in Europe, Egypt, Palestine, Mesopotamia, East Africa, the Dardanelles, and within British India.

It draws attention to problems encountered in their deployment, but also highlights successes such as the capture of Haifa and Aleppo by State cavalry units, and the outstanding role of some State infantry units in East Africa. One appendix records over 1,600 State soldiers who died - killed in action, died of wounds, or as prisoners of war, or died of disease, while other appendices record battle honors and rewards for gallantry or meritorious service. Problems identified during the war were addressed in its aftermath and the book concludes by looking at recommendations which led to the transformation of the Imperial Service Troops scheme into the Indian State Forces scheme.